I’m starting a new ski build this week. The ski will be used for racing and all around skiing. And if we get snow I may even have a chance to test it out this season. Here are the ski specifics:

This ski will be made with 1 big difference. I will not be using epoxy. Instead I’ll be using polyurethane glue. I’ve been performing tests with the glue and all indications say it should work just fine. I’ve used it to make all wood laminate skis with no problems. It bonds to all of the above materials and appears to be strong. So now it’s time for the real test.

01/15/2012-
The skis are in the press as I type. Been lazy about keeping the blog up dated. I have high hopes for this ski since I’m using polyurethane glue instead of epoxy. And I’d really like to get it done by this wednesday night to race on it….. Doubtful but Ill try. I don’t want to rush through the build.

My sample piece I made held fine. I put it in the freezer for a few hours and then tried flexing it. No delamination occurred. So it all should work….. should…… Here’s pics of the sample layup for last week:

The sample layup below consists of the p-tex base, fiberglass, 3mm wood veneer, fiber glass and 2 strips of Olive Ash Burl veneer. It has not lost it’s shape or relaxed at all. 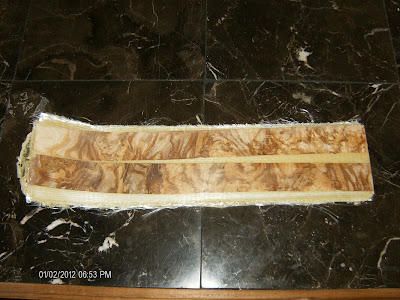 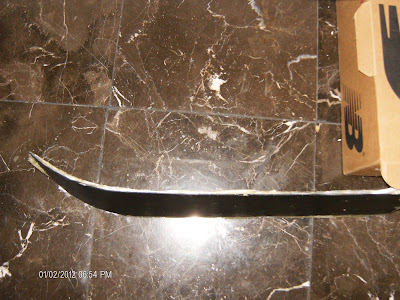 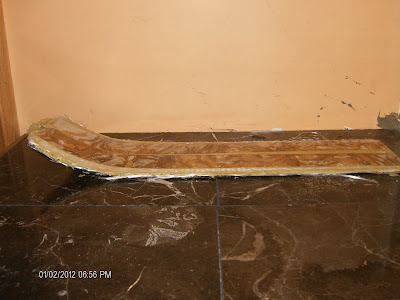 Here’s a list of the ingredients in the pic below. Starting from the bottom:
1. VDS – Vulcanized rubber. Used as a shear layer between the metal edge and Fiber Glass
2. Fiber Glass 22 oz weight.
3. Polyurethane Glue in the bottle
4. Ptex – The blue strip. It is used for the base of the ski
5. Metal edge on top of the P-Tex
6. Olive Ash Burl veneer. It will be used for the top sheet (I’m going to hate it when it gets chipped for the first time.
7. Douglas Fir wood. This wood is used in front and behind the binding area. It has a very tight vertical grain,  is light weight and provides a balanced flex with the other woods.
8. Ash wood. (white in color) This is a very hard wood also with a vertical grain. It’s very hard and is used in the binding area to provide excellent screw retention for the bindings and/or binding plate. Also gives a firm flex under foot for good edge hold.
9. Maple wood. (reddish in color) This wood is used for the side walls. It’s also a very hard wood. 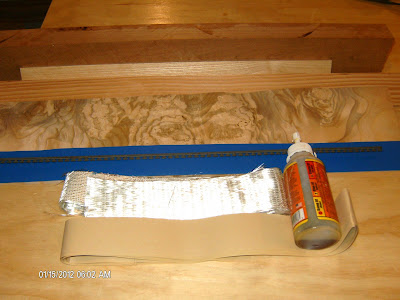 That’s it for now. Tomorrow I’ll post  some pics as they come out of the press. If all goes well I’ll spend the day finishing the skis.
Stay tuned.
01/16/2012-
Took the skis out of the press this morning. Surprised that some of the glue still had not set up 100%. I think I either used too much is some areas or because I didn’t moisten the materials according to the directions on the bottle. I didn’t moisten the sample layup either and that came out fine. So next time I’ll make sure to moisten the fiber glass and the ski base.
Here’s a few pics:
Here’s a shot of the base. As you can see I haven’t remove all of the glue. I waxed the base with hard paste floor wax so the glue would not stick. It comes off easily. 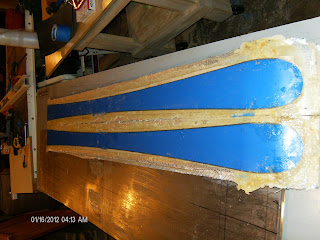 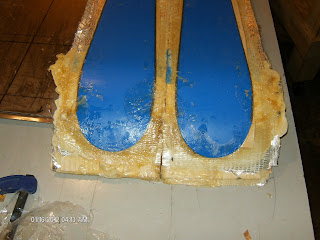 The top of the skis. I’m going to let them sit over night before I start cutting the flashing off. 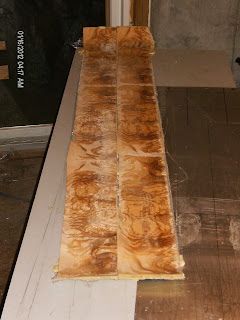 Close up of the wood veneer. This should finish nicely. I initially wanted them done for this wednesday night (1/18) but there’s no way to get them done in time. I want these to be show room worthy so I’m going to take my time. 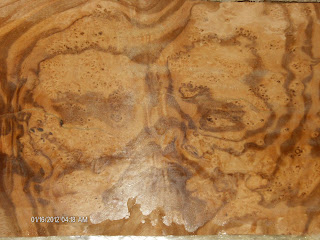 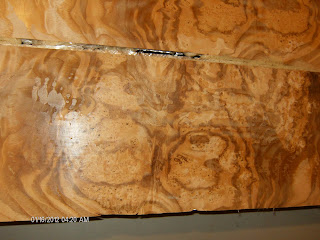 1/23/2012-
The skis are just about done. Here’s some pics of them with 7 coats of linear polyurethane. I’ll buff them out later, mount bindings and clean/tune the base for wednesday night race, assuming we don’t get postponed again.
I think they will be good for the type of GS racing we do which is basically NASTAR. Fairly wide open course with 2 or 3 gates that require good timing.
I raced a GS course saturday with the Ski School Ski, aka Día de los Muertos skis, and had a very successful run. Even though they are on the soft side they responded very well and held great. The course was very turn-y with a nice rhythm. That ski is a 168cm with a wood core of 3-10-3. The ski below is 175cm with a wood core of 3-12-3. It’s a little firmer but not drastically. We shall see.
I’ll update with more pics tomorrow and with feedback on how the skis handle later in the week. 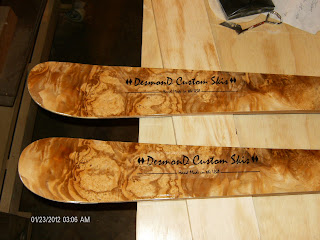 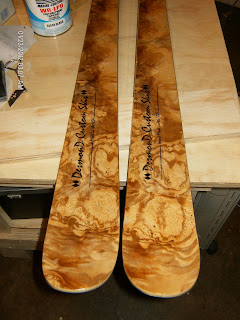 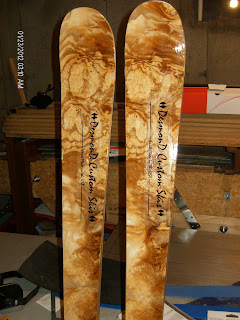 .
1/26/2012-
So I skied/raced on the ski last night and I like everything about them. They have a great edge hold, responsive, a little bit softer in flex than the 180’s I used last year which is a good thing. Torsion-ally firm which is why I think the ski runs as well as it does. Conditions were frozen granular and hard pack.
After the race I took on a few runs and really leaned over on them. The skis never washed out and carved really nice.
Inspected the skis this morning. No delams, tiny cracks or places where the edge might pull away. Checked the base where it may bubble up or loosen away from the core, nothing so far!
So time will tell now how they hold up. I’ll be racing on them for the remainder of the season and will post any degradation issues along the way. I think this combination of wood construction is a real winner.
Probably the last ski I’ll make for the season, they’re starting to pile up  🙂 (unless I get a request).
Now it’s time to start working on the website, fine tune a few things!
Stay tuned.
2/11/2012-
The GSComp skis are still holding up great! I took them out yesterday for a full day of skiing at Butternut in Great Barrington, MA. Conditions was frozen loose granular. The skis held a great edge all day long. No signs of delam or any other problems. Also took out the The Woodies (all wood skis). They also held a great edge all day. They were a bit stiff for the conditions, it’s a better ski for longer radius turns. The width under foot on the Woodies is 86mm while the GSComp skis is 68mm so they ski quite different. The GSComp has a radius of 15.4 and the Woodies 16.25. Not that big of a difference in radius yet it felt much bigger since the Woodies were more stiff and it takes a little more effort to get the ski over on the edge. 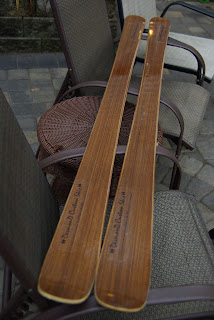