I’ve been slacking when it comes to ski building recently and haven’t done much R+D to date. But a nice little project developed over the last few months where I volunteered to mentor a high senior for his ski building project. I decided this project was worthy of a write up to give other fledgling ski builders a peek at what’s involved.

When some one asks if you’d be their mentor, how can you say no? Especially when you share a common interest or should I say obsession, ski building!

I met Jordan Saffer a high school senior, ski instructor and future ski builder through a friend Peter Bradford who I made skis for last season. To make a long story short, a family friend of Jordan’s knew Peter and Peter kindly put Jordanin touch with a few months ago.

Jordan had an idea for a senior project to build a pair of skis. He asked if I would mentor him for this ski building project. Sure why not I thought. Now, it’s hard to describe all the difficulties and challenges of ski building, I could fill a large book of gotcha’s, oopsies, oh $#1t blunders. I can honestly say it’s on par with renovating your first house or re-building a car from the ground up. For anyone who’s watched a DIY home renovation, the 30/60minute show is really months of hard work. Ski building is no different. Many times I’ve stood there looking at what’s in front of me and wondered “what the hell did I get myself into”. And it didn’t seem that I could change his mind.

If he’s willing to work hard it’d be fun. He also had his high school shop teacher as a mentor. But here’s a new challenge. Jordan lives in Virginia, I’m in Massachusetts. But I figured with the power of the internet, we could do it. Hell maybe I could make my first youtube video….

On his first visit to the shop I gave him a 15 min crash course on ski building. I think his head almost exploded. There’s so much knowledge to transfer. And we didn’t even talk about how to make a ski press. But he was still psyched to march on. We exchanged more emails. I gave him a starting point and the holy grail of ski building info, www.skibuilders.com and Sno-CadX an easy to use CAD style software tool for designing boards.

So I really didn’t think he could get all this done in about 3 months time. Even for an experienced builder, 3 months just isn’t enough time. I think he realized that at some point along the way. So he asked if I would let him use my ski press. Sure. If you’re willing to drive 7hrs from Virginia, that’s really hard to say no to. It showed me a level of commitment. So a few more emails were exchanged, he got his ski designed, the template made, p-tex base cut out and edges attached, and the wood core made and shaped.

There was also a few firsts for me as well in this build. The ski design is a twin tip. We used a different epoxy (West System) from what I use, I wasn’t sure how well it was going to bond. There are hundreds of epoxies each have their only characteristics. The top sheet is art work his grandfather made so we didn’t want to mess that up and the wood core was made from stacking/glueing layers of ash veneer and then shaped. These were all first for me. So I’m a bit nervous if the epoxy will bond properly to all the materials especially the art work. And it has a very long cure time, 24hrs.

Jordan arrived Friday evening (6/1) with all his materials. I was impressed with what he had made so far. We made some minor adjustments to the wood core. The tip and tail were a bit too thick so we sanded it down to about 3mm. After that we laid out the materials on the work table, mixed the epoxy and got to work. One thing I kept reminding myself, this was his project and I was here just guiding and assisting him along the way. And he really did 95% of the work once I did a quick demo of what to do. It took us about 45 minutes from the start to finish. The epoxy had a very long working time so we were able take our time and thoroughly wet out each layer with epoxy. Before long we had the top sheet on and the skis were ready for the press. I placed the skis in the press which can be a little tricky. And now we waited the long wait.

On Saturday morning I checked on the skis. They were in the press at 40psi for 10 hrs. I checked some leftover epoxy in the mix jug and the epoxy still had not cured. It was very rubbery. The epoxy I use would have been rock hard by now. So now I’m a little worried. If I pull the skis out too soon, the skis could relax and the tip/tails and camber could loose some of it curvature. I decided to leave the skis in the press for the rest of the day. I checked the epoxy later Saturday night and it had firmed up some. I had my fingers crossed. Things were looking better. At 10:00pm Saturday I turned off the air compressor. The skis have been under pressure now for 25hrs. If they haven’t cured by now, well, they probably never will.

I pulled the skis out of the press Sunday morning around 8:00am. I left the actual unveiling (ie removing the skis from the metal cassette housing) for Jordan.

Jordan arrived about noon and removed the metal cassette and wah-lah, skis look great! We got the shop set up for all the finishing work which entails separating the skis from each other, trimming off all the excess material (flashing), belt sanding the side walls, then beveling a 20degree bevel on the side wall, hand finishing with a light sanding and then a coat of linear polyurethane. The only part that I did was the beveling, which required very careful use of the router and I did make a minor goof which we were able to sand out. The finishing took about 4hrs or so.

Overall they turned out great! I would gladly ski on them. There were some minor imperfections that are all cosmetic and will not affect the performance. Here are some pics from the build.

(the time and date on the pics are incorrect) 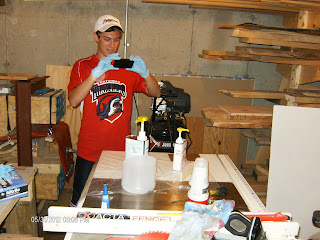 Layup table with the materials ready to go 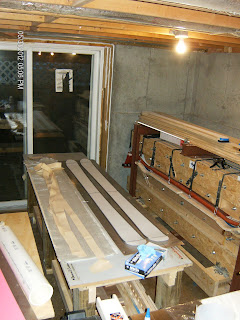 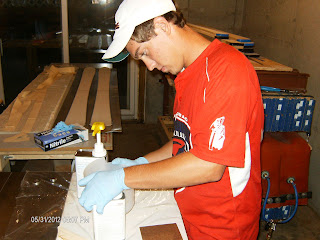 Layup just about complete. One more layer, the top sheets on the left of the table, they’re face down.

After being in the press for over 35hrs… 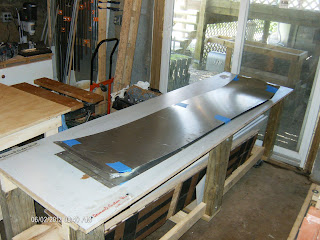 I let Jordan do the unveiling, although I had to peak before hand. 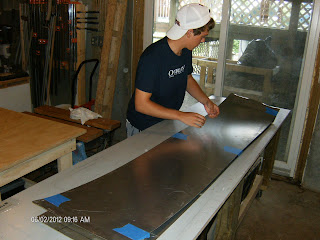 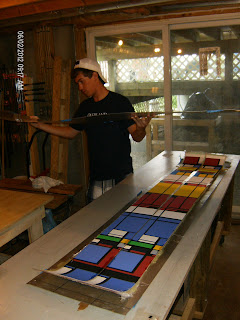 Time to separate the skis 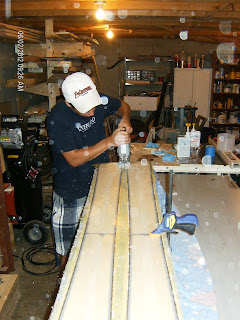 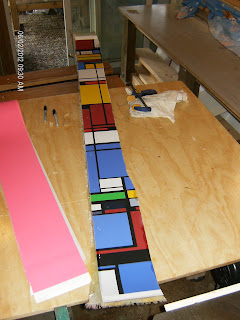 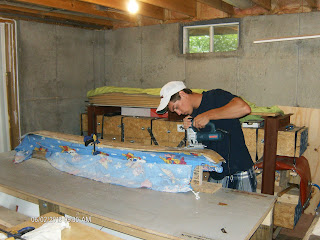 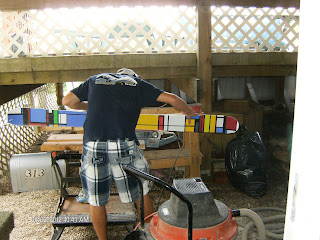 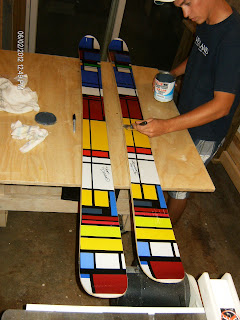 Over all a huge success for his first skis! I think he learned a few things the last couple days.

Jordan, good luck with college. Send me pics when you get them on the snow.