New this season is a wood core design I’m working on that takes advantage of an extremely hard and dense wood called Ipe. Ipe is known by many other names such as Ipe Brazil, Amapa, Cortex, Guayacan, Flor Amrillo, Greenheart, Madera negra, Tahuari, Lapacho negro.

Sticking with the concept of avoiding as much plastic as possible, I’ll be using Ipe for the sidewall. It’s 2.5 – 3 times harder than ash and maple. The wood core will consist of 5 stringers of your choice of wood depending on the firmness and flex you desire. Current wood offerings are poplar, douglas fir, maple and ash. You can also mix the stringers. However the Ipe should provide quite a bit of rigidity to the ski.

So, I have 3 basic wood core designs. First is my tried and true blend of ash, maple and douglas fir. Second is an all wood core consisting of vertical and horizontal lamentations and now a new stringer design with Ipe sidewalls.

I’ll provide a full report on how it handles.

As promised here’s my report on the ski above.  It’s called the Skulduggery ski. 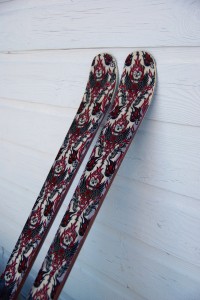 I’ve had quite a few days on the skis at my local ski area, http://skiblandford.org/ , and just got back from 3 days of skiing at Smugglers Notch, Vt.  I was extremely happy with how they performed. The first day of skiing was typical New England conditions. The snow was fairly hard with some loose snow on top. Great for carving and the skis did not disappoint. Nice and stable. Friday after noon it started with a light snow and continued through Sunday after noon. A good 6 inches of snow fell at the base. We did a lot of glade skiing. Skis were a little bit wieldy in the trees.

I met up with Vin Faraci another ski builder who lives near Smugs. He was skiing on one of his big rocker skis. We took a glade run and I saw first hand the advantages of a rocker ski in the glades. So yeah, rocker does serve a real purpose. Does every ski need it? I’d say no, but if your skiing big mountain powder or glades it’s a nice to have.

So back to the skulduggery ski… This is another keeper. The ski quiver is getting big. The crystals on the skulls eye sockets are a real attention getter too. They ski as good as they look. Poplar is a semi-hardwood that’s light weight. The Ipe sidewall provide a good deal of stiffness to the ski and excellent edge grip. No problem leaning them over and the ski never washed out.

I have a similar ski in the works that’s 172cm 128-82-108 that’s an ash core and Ipe sidewall. I’ll be delivering those to the customer this week. I hope to get some feedback on them before the season is over.