I made 3 sets of skis this season each to accomplish something new or different. Here’s a review of each one:

These skis have been 100% great, not a single disappointment. I made them to be on the soft side yet torsionally rigid. I built them exclusively to be the ski of choice for teaching. The topsheet held up ok. They got more banged up the ski storage room at the hill than on the slopes. These ski carve on any condition and hold beautifully. At times I could practically get my hip to touch the snow when cranking out turns and these skis held up. Very happy!

Lot’s of compliments and questions about the graphics 🙂

And being the season it’s been here in the New England, I could not have asked for a better ski. So this ski design is a keeper!


Next the Poly-U ski:

Another great ski that I’m extremely happy with this season and another keeper! This ski is an experiment in using poly-urethane glue (Gorilla Glue) in place of epoxy. All the tests I ran said it would bond to the materials so I gave it a try. So far this ski has stay bonded! No delams at all. Now I just need more days on the ski for durability but I think it will hold up.

I’m using this ski as a racing ski for out beer league racing. It performs great and I’m having a great season on them. It’s a bit shorter than last year GS skis I raced on. That was a 180 all maple skis and a very firm flex. This ski is a 175cm. It’s also a bit softer in flex but still torsionally rigid. A great combo!! I think this ski has allowed me to turn quicker and get over to the other edge quicker…. at least it feels that way and my times/placement have improved slightly from last year. No Olympic or World Cup medals on the horizon but a lot of fun!

So this is another design that is a keeper. As for the continue use of poly-u glue, I’ll wait till I have more time on the ski. But it seems to be working. 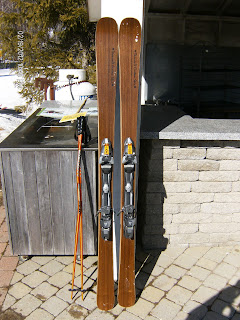 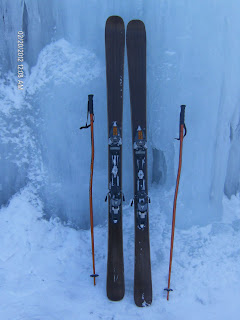 This is the all wood ski with a typical wood core that’s vertically laminated and then poplar veneer horizontally laminated in place of FG. For me this is a fat ski. Patterned after the Rossi S86. It also came out very firm since the wood core was +12mm, layering 2 layers of poplar each being 1.5mm made the ski pretty firm. Torsionally I’m not sure the ski can be bent/twisted :-). That’s the part I like.

I had the chance to ski all day on it yesterday at Stratton Mtn Vt. Conditions were packed powder with loose top of 1-3in fresh snow and frozen granular. Typical N.E conditions. Got quite a few inquiries about the ski. People are very intrigued with hand made skis. That’s goes for all the skis in this post.

What I didn’t like:
– Chatter. I noticed on my first run I hit a steep and hard pack area (not quite ice, but that white hard pack snow) with some speed. When I tried to hit the breaks hard the ski chattered hard! Like going over mini ski bumps very fast. I quickly changed my edge. Since there’s no dampening material to speak of I’m contributing that chatter to that. However, I also noticed the chatter subsided when I stayed balance on the front of the skis. When I was up to straight or in the back seat even a little bit, the chatter came back. So once I discovered that I just stayed forward and balanced and that took care of 90% of the chatter. So the chatter only occurred during heavy braking for the most part, or when side slipping on hard pack too fast.

– Retrospect I think a 10mm core would have been plenty. I may make another ski like this next season. I would like to pursue this all wood ski concept more.

Not sold on the wide ski for typical N.E. conditions, takes some getting used to the wide ski after skiing on 68mm or 72mm skis under foot. If there was say 6in of fresh snow I think this ski would have been perfect for that type of snow conditions. I have skied the ski in soft snow and it’s perfectly fine. Of course I’m basing my experience of fat skis solely based on this ski so take it with a grain of salt.

So a full day of skiing on these was great and it was nice to get some vertical in for a change. Skied from 9:30-3:30 non-stop (15 min lunch, pee break) was pooped at the end of the day but with a fat grin!

This ski was also made using Poly-U glue.

Overall a thumbs up. When I found the sweet spot, which is narrow, I was happy. I’ll make more all wood skis next season but try a GS or more traditional width ski.